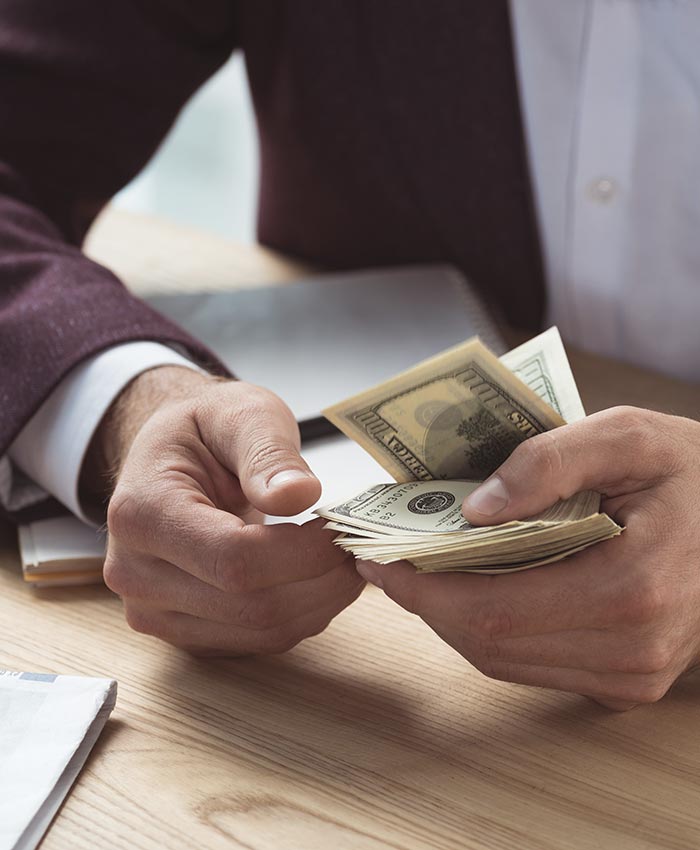 Divorce is stressful and expensive. When your spouse dissipates marital assets, it makes it even more so. It is not unheard of for spouses to engage in behaviors that are detrimental to their financial well-being, including overspending on luxury items or taking on more debt than they can afford. If you’re going through a divorce, it’s important to know how hidden assets and spending during the process could affect your future finances. We can usually uncover these expenditures during the case as dissipation of assets in divorce is a common issue in our cases.

Here is an example:

While you are traveling on a business trip, you decide to take a quick detour visit to the spa resort with that beautiful lady you met on the last flight to Los Angeles. Being the perfect gentleman, you pick up the tab on your Amex card for the room, meals, and a lovely bracelet for the damsel. You think that your credit card is absolutely your private property and you may use it as you please. Wrong!

When the divorce hits down the road, your wife’s attorney can subpoena all these records, and you will find yourself faced with a claim for dissipating marital assets. Although Colorado is a no-fault divorce state, and evidence of one spouse’s misconduct is not admissible to determine how property is divided, the court may adjust amounts awarded to each party if it finds that one spouse has squandered or given away marital assets during the marriage.

Marital asset dissipation occurs when one spouse has consumed, given away or otherwise transferred, mismanaged, converted, or otherwise adversely affected property that, had it been before the court, would have been subject to equitable distribution. This commonly takes the form of spending marital funds for the benefit of paramours or wasting marital property. Under Colorado law, dissipation is also called “economic fault” and is considered different than “marital fault.” See, e.g., In re Marriage of Jorgenson, 143 P.3d 1169, 1173 (Colo. App. 2006). Marital fault is when someone has an extramarital affair. Economic fault is when a person spends money for the benefit of the person with whom they are having the affair. A claim for dissipation is valued at the time the asset once existed. See In re Marriage of Finer, 920 P.2d 325, 331 (Colo. App. 1996) (“marital assets are dissipated by one of the parties, they must be valued as of the time when they existed.”).

When making a dissipation claim, a spouse only needs to prove that the expenditure was made at or during the time of the marriage breakdown or spent for a non-marital purpose, (such as significant gifts, hotel rooms, air tickets, etc for a mistress,) during the marriage. Once the spouse proves this, it is the burden of the other spouse to show that they spent the funds on a legitimate purpose. If the court finds that dissipation has occurred, it will appropriately adjust its division of property to offset the dissipation. These points may be useful to you if you think you may have a claim for marital asset dissipation.

Your attorney should be your first resource in making a dissipation claim. Through interrogatories, requests for production of documents, financial releases, and depositions, he or she can trace just about any of your spouse’s expenditures during the time of the marriage and can use documents turned up to file a dissipation claim. Be aware that any expense you make – be it with credit cards, checking accounts, cash withdrawals, or rewards and mileage accounts – are subject to review by your spouses’ attorney during the divorce proceedings and can be used against you in a dissipation claim.

It’s not the size that matters: The fact that you or your spouse dissipated items of little monetary value will not stop the court from adjusting its allocation of resources, although you may personally determine that the costs of pursuing the dissipation claim exceed the benefits of having it remedied.

Ease up on the vice: Excessive expenditures on gambling, drinking, or indiscriminate, reckless spending are considered grounds for a marital asset dissipation claim. In addition, bad behavior that is seen as economic fault can significantly influence the judge’s discretion in making an equitable division of marital assets.

Trim down the transfers: If you or your spouse transfer assets to a family member, lover, or third party, one of you may be allocated another asset to make up for the loss caused by the transfer.

Play down the paramour: Spending marital property on gifts for a significant other is a prime example of asset dissipation and very likely to result in a court-ordered adjustment of property division. It also infuriates the spouse who discovers the dissipation, and may substantially reduce any prospect of reaching an amicable settlement out of court.

Your word is your bond: If you or your spouse agreed to an expenditure during or after the breakdown of the marriage then there are no grounds for a claim of asset dissipation.

Hobbling hobbies: Expenditures on recreational activities or hobbies that both parties enjoyed, or approved of, during the marriage are not usually considered examples of dissipation.

Assessing the damage: The court values dissipated marital assets as at the date that they were dissipated. This is particularly important as it pertains to investment or retirement accounts, as if one spouse cashes out, the court will value the investments based upon on the date they were sold, not based upon what they might have turned into had they remained invested.

Placing Assets in a Trust: Under some circumstances, placing marital assets in a trust can be considered dissipation of marital assets. See, e.g., In re Marriage of Pooley, 996 P.2d 230, 232 (Colo. App. 1999) (“we recognize that there may be situations in which placing marital property into a trust would amount to dissipation of that property, so as to warrant including its pre-trust value in the property division.”); see also Kaladic v. Kaladic, 589 P.2d 502, 505 (Colo. App. 1978) (“Here, the conveyance of marital assets by the wife into an irrevocable, discretionary trust without her husband’s knowledge was properly set aside by the trial court.”)

If you are planning to file for divorce it may be useful to investigate your spouse’s spending, particularly if the reason for the divorce is an affair. If you are involved in an extramarital affair you need to beware of using marital funds to fund vacations, hotel accommodation and gifts for your significant other or you may be faced with a very angry spouse spending additional attorney fees auditing all your bank accounts, credit card statements and tracking your spending. Remember that marital funds are not yours to spend on third-party relationships and your spouse will not feel happy about contributing to the weekend at the spa without them.

Playing “hide and seek” with marital assets can turn into a game of “seek and destroy” for your spouse’s attorney.

To learn more, take a look at how cheating and infidelity affect dissipation and hidden assets.

Suzanne Griffiths is the Managing Shareholder of Griffiths Law PC. She was recognized by the Best Lawyers in America© in 2019 for family law and was selected to Colorado Superlawyers from 2005-2019. She was also recognized in 5280 magazines for Top Lawyer in Family Law in Denver from 2016-2019.